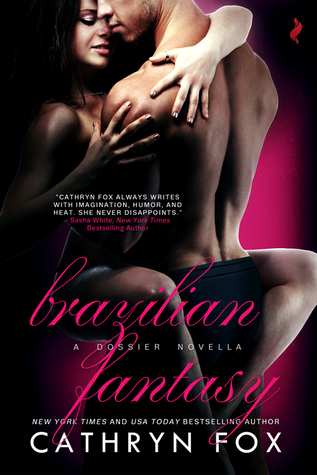 Daycare teacher Piper Young has five of the best friends in the world. Even though they did get her to agree to their crazy plan. Each friend is given a dossier outlining an adventure they must go on to get out of their dating ruts.When Piper finds herself in Brazil and sets eyes on the sexy billionaire her friends have in mind for her–she’s all in. Hell yes, Best Friend of the Year Award goes to…Except, there’s a glitch. Turns out she’s there to babysit his kid. Who the hell put that in her dossier? The point is to escape her normal life. Yeah, no award now.But the dark and mysterious widower is so much more than she could ever imagined, and the chemistry between them is off-the-charts. And now he’s using their two weeks to try to convince her to stay.
BUY LINK:  Amazon

In Brazilian Fantasy (Dossier #5) by Cathryn Fox, Piper Young needs to get out of her dating rut. Luckily, her friends have sent her to a beautiful place where she can hopefully let loose and have the adventure of a lifetime. However, once she gets to Brazil, she finds she'll be babysitting the daughter of Lucas, a gorgeous Billionaire. But the more she gets to know Lucas, the more she finds herself captivated and wanting things she never thought she wanted. Will Piper and Lucas get their happy ever after?

This was a super quick read for me and I loved it from the beginning. Piper is looking to have some fun and get away from her job as a Daycare Teacher, but it seems she can't escape that world. Will she leave or will she help the little girl finally recover from the trauma she's suffered of losing her mother the way she did? However, it was from the moment the hero and heroine come face-to-face for the first time that had me really enjoying this story, as there's instant chemistry between Lucas and Piper that just keeps getting stronger the more they interact. Will Lucas be able to win Piper over? Will Piper be able to help Lucas heal from the hurts of his past?

As for the dialogue, it was intense due to the main characters back stories, as both have been hurt by past relationships, but I liked how they helped each other move forward. Certainly, Lucas's daughter needs Piper as much as Piper needs her to realize that she should want more in life than being a Daycare Teacher and having great friends; things such as love and children. Moreover, I liked that once the heroine accepted her new adventure wasn't going to be as adventurous as what she thought, I liked how she did her best to seduce the hero. Will her plan work? I also liked the growing bond between the heroine and the hero's daughter, especially since the young girl doesn't communicate with anyone after all she's been through. Will Piper be able to help the little girl find her voice again?

While the hero, he's been through tough times with what happened to his ex and the guilt he's felt since her passing. However, the hardest he's suffered is not being able to help his daughter enough and I liked that he gave Piper a chance, even knowing that when they first meet she doesn't seem happy to be caring for a child. I also liked how confident the hero is and that he goes after what he wants and what he wants is Piper. Will he get a second chance at forever after?

Overall, Ms. Fox has penned another fantastic read for this series where the romance was fan-your-face hot and totally steamy; and the ending had me loving the choices the heroine makes when it comes to being with the hero. How could she not want her life to change for the better, especially when love, family and happiness are the reward? I would recommend Brazilian Fantasy by Cathryn Fox, if you enjoy a quick read with lots of heat between the characters or books by authors Naima Simone, Nina Croft, Samanthe Beck and Tessa Bailey.