REVIEW: WANT YOU by STACY FINZ 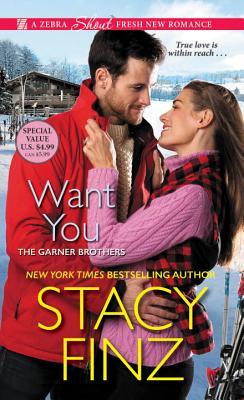 The smart and sexy Garner brothers have turned Glory Junction into California's hottest extreme sports town--and a thrilling adventure of the heart is always part of the deal . . .
The savvy CEO behind his family's outdoor sporting empire, TJ Garner has his choice of women. But the only one he wants is way out of bounds. Deb Bennett has been his brother Win's on and off girl since they were teenagers. And Deb's still waiting for Win to quit fooling around and realize she's The One . . .Deb carves the ski slopes and rides the rapids like a champion--it's getting her every day life in order that's the real challenge. When she turns to Win's big brother for financial advice, TJ spontaneously offers the hard-working waitress an executive job at Garner Adventure. To Deb's surprise, the job is a blast--and so is working for TJ. She always knew he was a heartthrob, just like all the Garners, but he's charming and attentive too. Of course, given the choice between him and Win there's no contest--or is there? . . .

In Want You (The Garner Brothers #2) by Stacy Finz, Deb Bennett is a woman struggling to survive with bills stacking up and her job not paying enough to keep up with them. So, when TJ Garner offers her an executive job at Garner Adventure, she can't say no. Not when the job will give her the chance to prove her worth and will have her working alongside TJ. However, working with the Garners is a blast and when she and TJ start to get closer, it's hard not to give into their intense chemistry. Will TJ and Deb be able to achieve their happy ever after, or will TJ lose Deb to the brother he believes she's always wanted?

Ms. Finz's books are always entertaining, and I really enjoyed this book because Deb is a down-on-your luck woman that finds her luck changing the moment TJ offers her a job; the hero begins to discover that work isn't all life should be about because of Deb; the dialogue was an enthralling combination of intense moments due to the main characters back stories and what the hero's brother is going through and playful banter that had me liking that TJ and Deb took a chance on each other; and the obstacles these two face to be together are tough, but I loved how they overcame them including whether the hero can do what the heroine wants to help with the company's online store and whether the hero realizes how good Deb is for him before he loses her.

Both the main characters were fascinating and I loved their back stories, as TJ has always been the responsible one and the best to lead the company while Deb has done everything she can to help her family and finds her efforts aren't enough. Will she ever earn enough money to make a dent in her bills? Moreover, the heroine is strong and brave in finally moving on from her off and on again relationship with TJ's brother and I liked that she finally took a chance on TJ because it's palpable how much he wants her. I also liked how hard-working she is and the brilliant ideas she comes up with to hopefully generate sales for the new venture of Garner Adventure. While the hero, he's charming, attentive and I liked that he would do anything to help someone in need, which is proven by how he helps Deb several times. Yet, what I liked most of all about the hero is the tight bond he shares with his family and that they would do anything for each other, even supporting one of the brothers that finds himself between a rock and a hard place when it comes to a woman that -- it's palpable -- is using Win for what he can give her.

Overall, Ms. Finz has delivered a wonderful read in this book where there's plenty of chemistry between TJ and Deb; the romance was fantastic, as TJ finally gives into his feelings for Deb; and the ending had me loving what the hero does to prove to Deb and his family that he has skills on the snow and isn't a coward anymore, even though for years he's felt like a failure when it comes to his sporting career that never was. However, it was how things worked out for this couple that I liked most about the ending because Deb is good for TJ. I would recommend Want You by Stacy Finz, if you enjoy the friends to lovers trope or books by authors Peggy Jaegar, Melissa West, Melody Grace and Jill Shalvis.